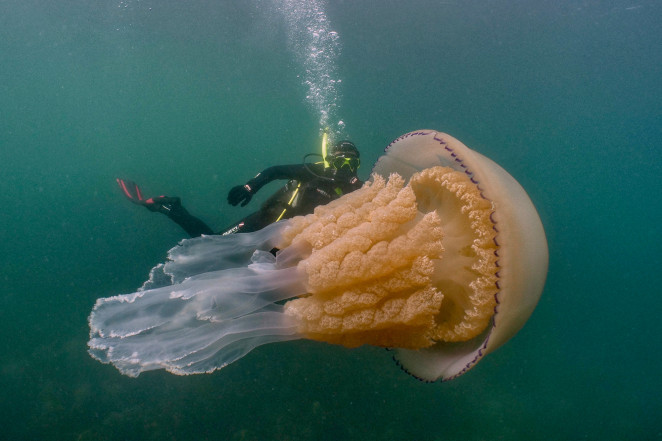 This weekend, the 24th to 26th August, #GBJELLYWATCH is taking place! What is the #GBJELLYWATCH you ask? The Great British Jellywatch Weekend is the largest jellyfish survey in the UK, and you can join in with the fun!

The jellywatch survey will allow researchers to gain a better understanding of jellyfish behaviour and numbers which allows scientists to understand how jellyfish are doing.

You can take part by heading to your local beach to see if you can spot any jellyfish and record how many you spot on the Marine Conservation Society website – https://www.mcsuk.org/sightings/report/jellyfish. Your results will help scientists identify the behaviour of jellyfish and spot anything unusual. Which is why taking part is so important!

Speaking of Jellyfish! You may have spotted the incredible picture above, recently, taken by underwater cameraman Dan Abbott, of S4’s Outreach Fellow Lizzie Daly in an extremely close encounter with a barrel jellyfish the same size as her!  Whilst Barrel Jellyfish (Rhizostoma pulmo) regularly reach over 1m in size, it is highly unusual to get so close to one of these wobbly giants underwater. The picture and video caught the eye of media outlets around the world including the BBC, CNN, Sky News, the Smithsonian, Washington Post, and many more.

Barrels are the largest species of jellyfish found in UK waters. They average 40cm in diameter but are known as ‘dustbin lid jellyfish’ as they can grow much larger. Barrels use a very mild sting, generally harmless to humans, to stun their food source – plankton – and to protect themselves from their main predator, leatherback turtles.

Speaking after the encounter Lizzie Daly described it as “breath-taking, an unforgettable experience, I know barrel jellyfish get really big, but I have never seen anything like that one before. We had been diving for about half an hour, and out of the murky water appeared this single, enormous jellyfish. I went to have a closer look, only to be surprised by how huge it was – the same size as my body. Diving with this beautiful, gentle giant was truly humbling”.

Cameraman Dan Abbott described the encounter “I took a picture of Lizzie alongside to demonstrate just how big the jellyfish was, and then realised it must have been about a metre and a half long, probably half a metre in width. At that point I was just awestruck. It was an incredible animal, you don’t need to go to the other side of the world to see amazing marine wildlife, there’s plenty right here on our doorstep!”

Lizzie and Dan were in Falmouth filming for Wild Ocean Week, an online series developed in collaboration with Marine Conservation Society to celebrate the UK’s seas by documenting as many encounters with marine species as possible. Lizzie and Dan travelled the length of Britain, swimming with seals in the Farne Islands, exploring ‘sea bird city’ at Bempton Cliffs, joining ‘Orca Watch’ in Scotland, Dolphin spotting along the Welsh Coast, and highlighting marine plastic litter via beach cleans along the way.

Although 95% water, barrel jellyfish are robust enough to have data loggers attached to them to find out more about their ocean life, which are vital as climate change impacts how often jellyfish blooms occur, and to understand the lives of the leatherback turtles who feed on them. Research at Swansea University has revealed that, far from being passive drifters in the sea, barrel jellyfish are able to move up and down the water column to maximise their chances of finding food.

Lizzie told us “It was great that the barrel jellyfish caught the world’s attention even if it was just for a moment – because for just that moment everybody was looking at British wildlife and feeling inspired by our oceans.”

To find out more about Lizzie and her adventures, you can follow her on: